Point Cadet is one of the saddest sections to visit in Biloxi. At one point, we drove past three city blocks in which not a single building was left standing. This neighborhood with a deep, rich cultural heritage was once filled with many homes and businesses that survived Hurricane Camille. In the satellite photos after the hurricane, I saw block after block of piles of lumber and debris. Now that most of the debris has been hauled away, all that is left are a few concrete slabs and some scraggly oak trees. Many of the slabs were either washed away or were so badly damaged that they couldn’t be reused.

The oak trees look so strange and lonely standing on barren blocks of dirt and grass. The large lower limbs were snapped off by the water and the upper reaches and most of the small limbs, leaves, and Spanish moss were stripped away by the winds. The remaining, twisted limbs are covered with small sprouts and leaves. The block with these oak trees was formally filled with houses. 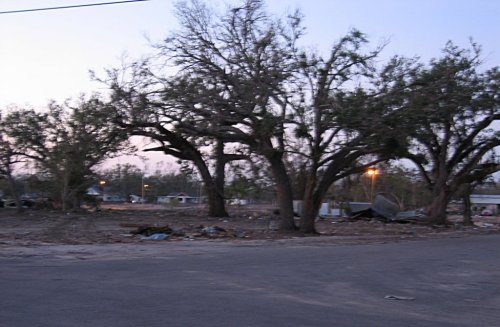 In this photo, you can see a badly damaged seafood processing plant off in the distance beyond the Palace casino, which is still listing into the water. At the closest edge of the casino barge, the first floor appears to be mostly or completely submerged. 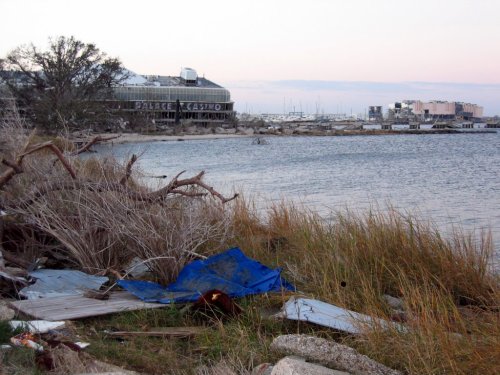 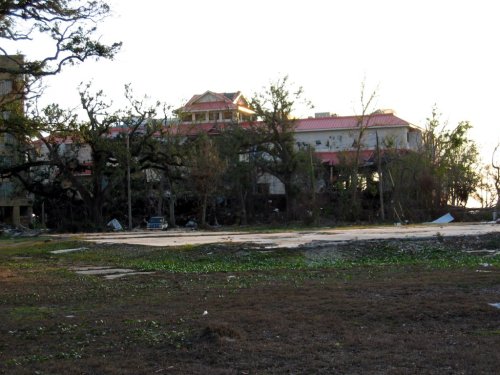