This image has appeared in a lot of stories on Biloxi after Hurricane Katrina. The Golden Fisherman statue was originally located in downtown Biloxi in the mid 1970’s and was widely mocked at the time, perhaps because of the imagery of a fisherman casting a net into what was then a mostly run-down urban area. Sometime later, the statue was moved to the foot of the Biloxi – Ocean Springs bridge, in front of the Gulf Coast Maritime and Seafood Museum. 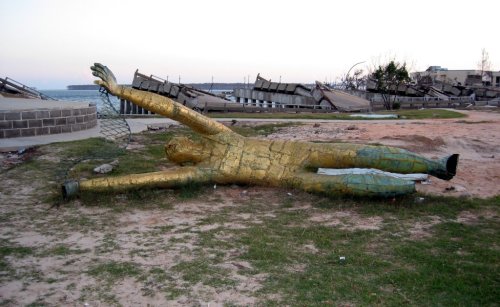 Since then, dowtown Biloxi has actually made a significant recovery. Of course, the hurricane has set the downtown back quite a few years, but I think it will recover from the damage.

I went to the Christmas in the City festival in the Vieux Marche mall while I was in Biloxi. A lot of artists and craftspeople had works for sale. Moran Art Studios was there with prints of a few of Joe Moran’s works. My mother and I talked to Mary Moran briefly. She said they are looking into reopening, at least temporarily, in a store in Ocean Springs. Their old spot has now been leveled twice by hurricanes, so they aren’t sure they want to rebuild again. I certainly hope things work out for them. Elizabeth Huffmaster also had some very nice prints and original watercolors.

Update 5/2/2007: I just found out from one of the commenters below that the statue was stolen last June, but then recovered. Here are some links to info about the theft.

4 thoughts on “The Golden Fisherman and Downtown Biloxi”