While it was tempting to write this post in all caps, that would cause me too much pain.

Yesterday I received my first ever 419-style spam/scam by US Postal mail. It was actually posted from Dar es Salaam, Tanzania, with a cool rhino stamp that cost somebody 800 Tanzanian shillings, which is currently about 55 US cents.

My correspondent is allegedly CHARLES TAYLOR (JNR), son of Liberian strong man Charles Taylor. Daddy is now locked up in The Hague awaiting trial for his role in the civil war in Sierra Leone. And, no, he did not have a role in the design of the classic Converse sneakers, though it hasn’t been proven yet that Naomi Campbell didn’t decorate her chucks with sanguine diamonds courtesy of the Chuckster. Seems like Chuckie, Jr., is reaching out to people in Spain, as well. 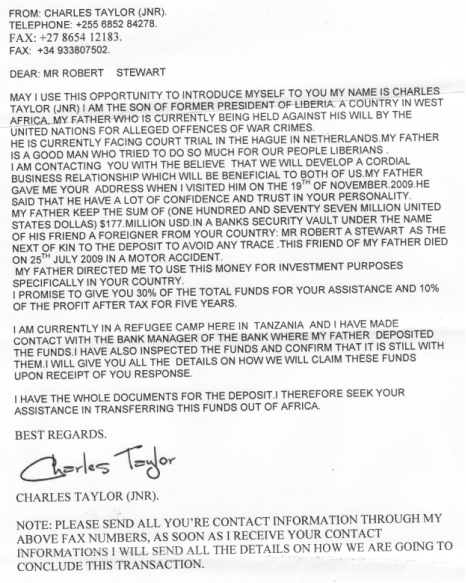 It’s a pretty sweet offer, as I would be in line for a minimum of nearly $90 million USD.