Note for my vegetarian and vegan friends. Nothing to see here. Move along.

We endured the spiral sliced ham shaped line at Blue Bottle Coffee this morning to buy 10 pounds of heritage-breed pork. Despite the chaos and lack of signs explaining how to pay or pick up your pork, everyone seemed to eventually figure it out, and no Walmart Black Friday incidents broke out. The free coffee, sausage and bacon after the long wait were pretty awesome, especially the sausage. I can hardly wait to cook the sausage we got in our bag. It was crazy good.

Chris Cosentino of Incanto was there, waiting in line with everyone else to score some pork. Although he obviously has a direct source for his restaurant, it was cool to see him there, relishing the experience with the rest of us.

For dinner tonight, we tried to make schweinshaxe from the ham hock. While an interesting experiment, it was a bit disappointing in the end. The next time a recipe calls for what sounds like too much cloves, I’m going to go with my gut and use much less. The meat came out a little too tough. I think we went way, way too light on the salt. That will teach us next time to use a real German and not a random recipe on the Internet next time we come face to face with a trotter. At least it looked great when it came out of the oven. 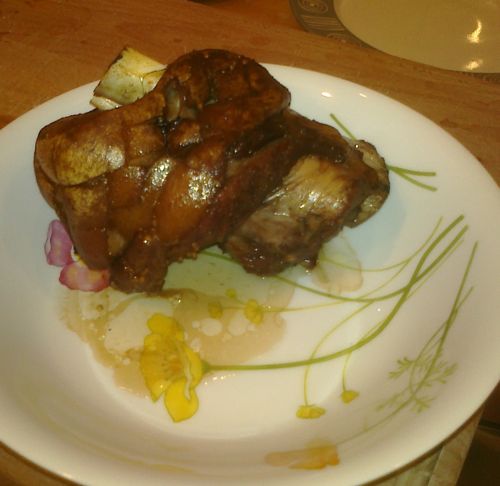 One thought on “Pork Prom and Schweinshaxe”