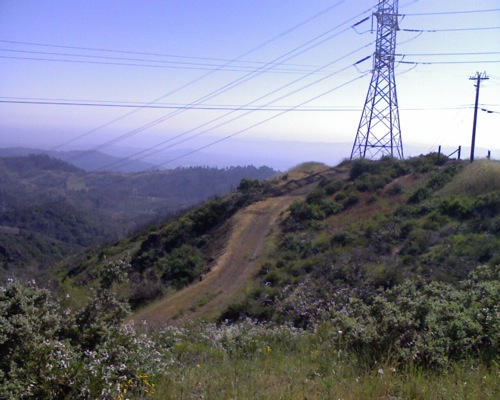 Last weekend we headed up to Geyserville and I decided it was time to climb Pine Flat Road. The photo above is from the top. I started out way down at the bottom of that valley, around 3000 feet below where I took that photo. The dirt road is actually a fire road. The real road is paved, but almost as steep in parts.

There’s a benefit ride coming up on June 6 that I wish I could make it up there for. They describe the route as “extremely tough and extremely steep” and “straight up with a beat-down at the top”. I concur. Check the altitude profile on that page.

The ride up was actually fantastic, despite the punishing climb at the top. The wild flowers during the bottom part of the climb were amazing and the canyon walls were beautiful. While I was happy to get to the flat part of Pine Flat Road, I knew the crazy steep finish was next. The climb finishes with over 1.5 miles of mostly 10-15% gradient, with one stretch of about 500 meters that had to be about 15% the whole way. I had to take my only break about 2/3 of the way up that stretch to avoid Roger Rabbit syndrome after my heart rate shot up close to 180.

Getting started again was fun, as it’s a very narrow road. I had to ride across the road a few feet to build momentum and turn hard and straight up the hill to avoid riding off the side of the mountain. If I didn’t make the turn in time, I probably would have gone 100 feet down the hillside before the brush or rocks stopped me. At that point, the vultures flying overhead would have suddenly taken an interest in my ride.

The descent started out a bit scary, as the steep turns with the big drop-offs made for feverish braking and cornering. Then as I entered a steep left hand bend, I heard the terrible sound of a flatting tire. The valve stem separated and the tire went completely flat almost immediately. Since I was in a hard turn, the now flat tire rolled over the rim and jammed in the brake. Of course, it would be the front tire, so I was launched over the handlebars. I went right shoulder first, with my body completely twisting over and landing on my left hip.

Fortunately, I had slowed way down for the turn, so I didn’t have much forward momentum. However, the road was so steep that gravity sent me sliding a few more feet. I scraped off all the skin near the bottom joint of a finger on my left hand and a rock took a small chunk out of my right thumb. Thumbs bleed much, much more than fingers. Especially near the tip of the thumb.

Of course, I had no cell reception. And the only car I had seen at the end of the road (it’s basically a dead end at a closed gate leading onto a private road) had already headed down the mountain. After gingerly (partly due to big scrape on my hip and partly due to Look cleats with covers on a steep downhill) walking my bike an 1/8 mile down the road, I caught up with the car that had just left. Fortunately, they were bird watchers and had stopped to check out the wildlife. They very kindly agreed to give me a ride down until I could get cell reception and call my wife to come meet me a little farther down the road with her Uncle Fred. Thank you bird watchers! You rock!

Update: 1/25/2010 Fantastic video of Levi Leipheimer descending Pine Flat Road. The corner in which I crashed is 3 minutes 5 seconds into the video. If this had been a video of my ride, it would have been at least 4 minutes into the descent. He’s taking the corners very fast.