My sister-in-law and her husband hosted a great pre-Christmas party with an excellent twist on the gift exchange game. The basic rules were the same, i.e. you can open a new package or steal something already opened, but on the third steal it’s yours to keep. In their version, though, everyone had to bring two gifts. One gift was supposed to be the best thing you could buy for $1 and one was supposed to be the tackiest or kitschiest gift you could buy for $1. We did a round with the “good” gifts first and then a round with the “bad” gifts.

The timing worked out perfectly and I was able to make the third steal of a stunning gift contributed by Craig’s daughter. This is the kind of diorama I wish I had built in grade school. I’ve enhanced it slightly with Binky, the three-eyed fish, and a little clay figure from China, but it was already amazing by itself. This beautiful seashore scene now occupies a prime spot in my office at work. 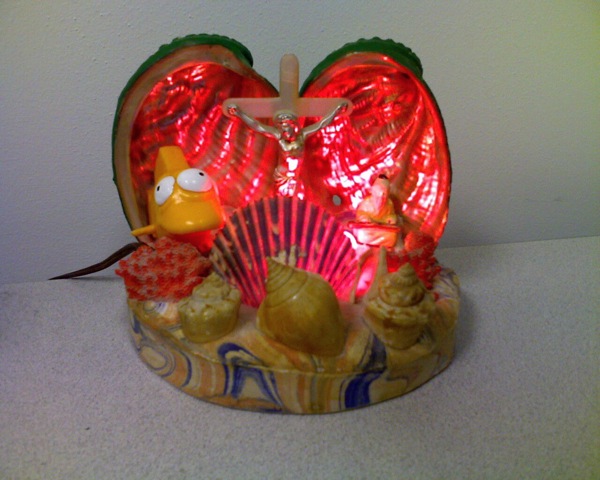 The red light district style illumination is courtesy of a Christmas tree bulb circa 1954 that is more or less stapled down to the base behind the clam shell. The wiring for the bulb is fairly terrifying. The wires on the plug end are completely exposed, making each act of plugging and unplugging it a game of Russian roulette shock therapy. So far I’ve managed to keep myself out of the circuit.

The Beach Jesus diorama was generally considered to be the best of the bad. Craig’s contribution of a cigarette burned Mr. and Mrs. Santa Claus dancing on a plastic base that was wrapped with a tattered red-and-white checked cloth taped together with transparent plastic tape was a close second.